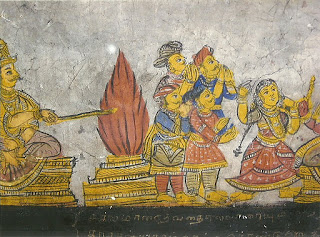 The Tanjore quartette in the Big temple Painting

The Tanjore big temple was a seat of learning, particularly music and dance. From the time of Rajaraja II this temple premises was brimming with artictic learning and activities. The times of the Nayak rulers consolidated this and the last ruling dyansty of Tanjore, namely the Marattas greatly patronised all art forms. Most of the kings being musicians, dancers and poets themselves their respect and love for arts and artistes was great. It was in the court of these Maratta kings that the architects of present day Bharatanatyam flourished.

The Tanjore quartette lived about 200 years ago. They were the “astana” or resident music and dance teachers of the Maratta court. They not only have taught bharatanatyam but also hindustani dance. This fact is authenticated by their own words in a letter that they have written to the King and signed themselves. The tanjore quartette are the four brothers namely Cinnayya (1802), Ponnaiyya (1804), Sivanandam (1808) and Vadivelu (1810). They were the children of Subbaraya nattuvanar (in the court of Pratapa Simha) and Paramanandam Ammal. They were trained from an early age in the twin art of music and Nattuvangam (teaching and choreographing for dance). They were in service during the time of Serfoji II and Shivaji Raja. They were the students of none other than the great Sri Muthuswami Dikshitar (one of the musical trinity). They are credited with having created a “margam” or path, format which we use in bharatanatyam even today. They were great vaggayakaras (twin art of composing the lyrics and the music simultaneously). Their compositions are preserved in hand written manuscripts in the possession of their family members and their students who have passed it on through generations through practice and traditions.

There is a beautiful painiting of the time of Serfoji II in the front Mandapam of the amman shrine where the Tajore quartette are depicted as doing nattuvangam and singing while a woman is dancing. This goes to prove beyond doubt that they were the appointed dance masters for the Brihadeeswara temple. They were empowered to do so. For these services the Raja had granted them a house near the temple (today opposite the sankara madam on kamakshi koil street) apart from other rights and previleges during temple festivals like Brahmotsavam etc.

They created dances called the Navasandhi kavutuvam which are based on agamic rituals. These are part of the dik bali poja offered to the nine cardinal directions and to the Gods of each direction. This was set to music and dance and performed by devadasis under the mastership of the Tanjore quartette during the Dvaja arohanam (falg hoist or flag ascending day) of any festival. It is truly my blessing that my gurus from the hereditary community have taught me all of the navasandhi and the pancamurthy kautuvams.

The tanjore quartette’s musical compositions are plenty. Their pada varnams, jatiswarams, sollus, javalis, sabdams, tillanas are available to us both thorugh oral traditions and from the Manuscripts they have left behind. However, as mentioned above the Tanjore quartette have not only taught karnatic music and dance but also hindustani music and dance. We have not got muvh material on their hindustani compositions (if there were any) or the kind of dance they taught. From a beautiful painting in the nrtta mandapa outside the Murugan shrine (a nayak period addition) which depicts on either side a karnatic dancer (costumed in south indian dancing style) and a hindustani dancer (dressed in a hindustani style, which resembles closely the present day kathak costuming with a whirling skirt and blouse) we can understand that they were not only teaching and performing both karnatic aand hindustani dances but these were practiced in that very same nrtta mandapa.

There is a very important document at the Saraswati mahal library, tanjavur. This is a hand-written letter from the tanjore quartette signed (in tamil)on behalf of them by Sivanandam . This is in Modi script and addressed to Serfoji II. In this letter they introduce themselves as the appointed music and dance masters at the Big temple were they teach both karnatic and Hindustani dances upon the ordain of the King on the occasion of the marriage of Sowbhagyavati Rajasabai Ammani to Raje Saheb. This letter is a complaint that the temple authorities do not allow them to meet or perform in front of the King. From this it is amply clear that a tarditon of both karnatic and hisndustani music and dance existed in tanjore all the way till the time fot he Maratta rulers. This writer is presently researching on the Hindustani compositions that the tanjore quartette taught to the devadasis, the Tanjore quartette’s contribution to hindustani compositions and the influence of that on present day bharatanatyam.

The tanjore quartette moved to various other samastanams too. While Cinnaiyya moved to the Mysore court, Vadivelu Nattuvanar was patronised by Maharaja Swati Tirunal at the Travancore court. Their music and dance genius has helped shape the dances and music of these regions too.

The Tanjore Quartette returned to the tanjore court again during the time of shivaji raja and contiued their yeomen service to dance and music from there.

Thus, the walls (paintingss), Manuscripts, documents of the tanjore temple and library speak volumes of the presence and importance of the Tajore quartette.

P.S.: This is a part of a paper of mine that was published in a university journal.

Next, on my Sufi experience…Tasawwuf!!!

From under rubbles of rich remains 🙂

9 thoughts on “Some hues on the Attic”