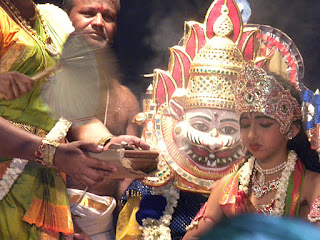 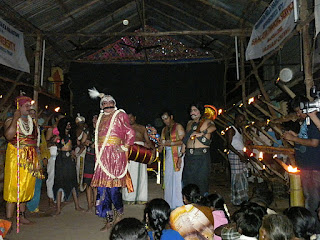 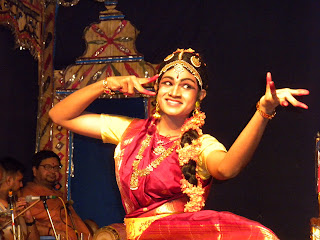 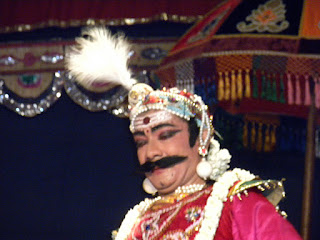 Well in the middle of the season we are. I have had a good month, except that I have had to make a few very important re schedules. But I believe that everything happens for a reason.
This time I choose to talk about a very important tradition that had changed my artistic journey forever.
Right about the time when life, both personally and artistically was really rough on me I took one of my pilgrim trips to my haven, Tanjavur. It was the month of april, may about 5 years ago. I wanted a big “time-out” from chennai and hence was stationed at tanjavur for a good 20 days. Tanjavur is not only a center of culture, but all pockets of small villages around it are rich with different cultural identities of their own.
During the time of the Nayak king Achyutappa, who was a great patron of arts, he had encouraged artistes and artisans of various art forms to come to his country. He promised them patronage and honour. It was under his guidance and great patronage that the Tanjavur Bhagavata mela natakams were encouraged. Achyutappa made large endowments for the up keep of this art form. He gifted an entire village as free hold lands for five hundred Brahmin families who had migrated from Andhra. They were the Bhagavatas. this village, which is presently called Melattur was previously known as Unnatapuri and during Achyutappa’s time it was called Achyuta Puri. This bhagavatha tradition following the Sri Vaishnava cult, perform various melas (natakas) based on puranic stories. They perform Prahlada Charitram on Nrisimha Jayanti day and continue for the next ten days with Rukmini kalyanam, Usha Parinayam, Harischnadra and other plays.Several other villages including saliyamangalam, neegamangalam, ottukadu all situated nearby too have a bhagavatha mela tradition.
I share with you my experiences.

Secrets of the soul -a divine and defining experience! The Bhagavatamela festival.

Man is one psyche, one whole of which body, mind and spirit are aspects. Every individual has in him this vast whole of consciousness, this great amount of contents of which the conscious self is not fully aware.

Many a times, I ponder about the artistic unhappiness one feels from time to time. While the reasons range from commercialization to marginalization one other important reason is excessive intellectualization too. While looking for a solution we realisation that to regain the lost happiness, the means is to attain inner artistic tranquillity- which is again the very purpose of art.

While, we struggle so hard to recreate a “temple stage” in our city prosceniums, while under the glares of arc lights, sophisticated acoustics, contemporary commentaries and the works we struggle to achieve the inwardization, let alone the more elusive “rasanubhava”, here is a clan of artistes who know no less than absolute inner tranquillity. It was a conscious, yet effortless reach for the “daiva siddhi” that Bharata talks about in the Natya Sastra, as the highest achievement or attainment of aesthetic enjoyment and the purpose of art.

Natya, a drama with music, dance, dialogues, stories, stagecraft and theatrics is best preserved by these dedicated artistes or Bhagavatas. The Bhagavatamela festival at Melattur year after year bings alive the greatest living traditional theatrical art form of Tamilnadu.

As I sat through the different plays I was overwhelmed, overjoyed and this excitement reached a crescendo leaving me tranquil. That’s when I started thinking; Melattur is almost cut off from even the main stream town crowd of Tanjavur or any of the other nearby towns. Just the travel to this place through the almost deserted road increases a sense of anticipation. Add to that a reverence one feels as we move into the streets. We begin to feel at home as we join people, both locals and visitors all gathered outside their homes and talking to each other from their “tinnais”. The air is fragrant with a festive mood. From the oldest living member of the village to even a tiny toddler, everybody is assembling and also assuming a sense of responsibility.
How hard do we struggle here in the city to gather people inspite of all the communication and transportation facilities? The audiences of our modern theatres are at luxury. They feel no obligation or sense of responsibility towards either the art or the artistes. Ofcourse, let us not blame them completely because when we are in the audience, don’t we do the same?

At Melattur, the reverence the artistes- each and everyone of them show (including every member of the musical ensemble) by first paying their obeisance to God at the temple and then getting on stage, the way they sanctify the stage with unhurried rendition of Bhajana sampradaya namasankeertanams, todaya mangalams while sanctifying the atmosphere and space with sugandas like sambarani automatically transforms the “site” or the stage into a reverential space. The message they send out is very clear; “we are about to engage in no ordinary entertainment, hence in the name of God let us endeavour upon this divine journey”. And then there is a beautiful start sans commentaries, explanations or credits. Including the audiences too in the namasankeertanams truly purifies and prepares our mind for the oncoming divine experience. All this stands in total contrast to the blaring of names, titles and laurels won, accompanied by thunderous applause that we are used to in the city. We applaud here at the Bhagavatamela too alright. Example, when Sri.Natarajan, the prime mover of the Bhagavatamela and a senior artiste walks in as Lilavati one cannot resist the urge to want to welcome him with a roaring applause, such in his poise, grace and if I may say, beauty. But when Lilavati and Hiranya have a repartee about his uncontrollable anger or while watching the long drawn powerful conflict between Hiranya and Lord Narasimha one simply not only forgets to applaud but even to breathe. Such is the power of their performances. Sri.Kumar who plays an electrifying and brilliant Hiranya brings out the character with so many shades that while watching his quivering lips and angry eyes one forgets that Hiranya is supposed to be a horrific rakshasha and begins to like the character and his mannerisms. There is no big fuss about drawing a line between loka dharmi and natya dharmi etc here. They are governed by spontaneity and that involvement absorbs us so completely that words of praise or even applause seem simply inadequate and almost silly. We are only filled with a sense of gratitude to God for giving us an opportunity to be a part of such an amazing experience.

Their technique, talent and artistic brilliance shine through with a power that oozes out of each voice that sings, each pair of eyes that express, each hands and legs that move. This power is palpably and directly drawn from none other than Lord Sri Narasimha himself from the temple right opposite to the stage. It is revelling to see how even Hiranya takes his strength from Hari. Everytime an artiste’s eyes fell on the temple, it glittered, dancing with joy and emotion as if, saying to Him “all this is your doing, for you and from you”. This absolute surrender reached the audiences like a wave of current. The young lad who plays Prahlada shines like a fresh pearl, timid and shy and yet showing bhakti and determination through his eyes that never once left the temple site.

The unhurried pace at which the Bhagavatamela natakas gradually unfold, scene after scene, helps the characters blossom and last in the minds of the spectators. This in itself contributes greatly towards reaching the aesthetic pleasure – Rasaanubhava. It is rather simpleton sometimes to expect this same feverish joy within the confines of an A/C auditorium, time clocks and an hour and fifteen minutes iron hand et al; Let us wake up and face the fact that by pushing our arts to the so-called grand venues we stripped much of its chance to unfold and leave a telling impact. The ambience and the audience play a very vital role in the aesthetic enhancement of any art. And if most times all we can have them remember is the colour of our costumes and some frivolous detail about the program that’s no success.
Notwithstanding the tough calls one needs to take on the choice between fast paced items to slow (chowka kala) pieces etc to retain audiences!, even the choice of language for commentary becomes somehow crucial and subject to criticism often. We think and come up with ways of simplifying and spoon feeding the spectators; Indian audiences, NRI audiences. Will the telugu audience like watching a tamizh varnam? Will the tamizh audience understand a telugu varnam? The dilemmas are endless. But at Melattur, which is a tiny village in Tamilnadu with predominantly tamizh speaking people, the Bhagavatamela natakas are presented in pure literary telugu. Ofcourse they do present an occasional tamizh play too like a Valli Kalyanam etc but definitely not with a prime motive of pleasing the tamizh audiences. It is extremely refreshing to see that there is no parochialism what so ever here. It is my opinion that it is only us, in the city who in the name of betterment and reach are over intellectualising the arts. The best tool that these traditional art forms like Bhagavatamela uses against this problem is, simplicity and adhering to tradition. They inculcate a taste for higher standards and understanding in the audiences rather than playing to the gallery. After all, how can the art be a tool of communication if its language is its own barrier or if its commentary leaves no room for interpretation? Of course by saying all this I do not mean to belittle the artistic greatness of those veterans whom we have seen and see as inspiring examples of how we can use the given space and time to create aesthetic joy on a city stage too. However, the accessibility we have to better ambiences, better aesthetics (viz a viz our great ancient temples) and how we almost overlook them and are quickly trading them for modernity and so called globalization urged me to think whether we are stepping into the global scenario without a definitive individuality and are allowing ourselves to be simply swept off our feet.

The religious and spiritual force that drives the Bhagavata mela artistes is telling. This great ritualistic nataka tradition answered many a questions for me. These dedicated artistes or Bhagavatas and faith taught me to never try to please anybody. I have to be truthful to my art and my heart. Criticism for that kind of process is abundant and success rather slow, but I learnt from them how to marginalize that disadvantage and look at the larger, bigger picture, where we might be part of a tradition building process. Of course traditions will have to stand the test of time. That will decide their destiny and future. But I shall strive to search deeper, farther and forever for the roots. I shall in the meantime, uphold what I have been left with, with sincerity and appreciation. How else can we explain how Sri.Venkatarama Sastri’s natakas (lived during the reign of Raja Serfoji) works would be fodder for powerhouse performances year after year, each year drawing the locals (repeat audiences) while being the canvas for stunning performances, fresh and new each time, yet still somehow unchanged for decades.

Afterall, creation is man’s lonely attempt to know his own strange and secret soul and its vocation along with his roots.

With this blog are some of the pictures that I had taken myself of prahlada charitram nataka. They belong to 2006, 07 and 08 I think.

2 thoughts on “Soul searching at the Attic !”