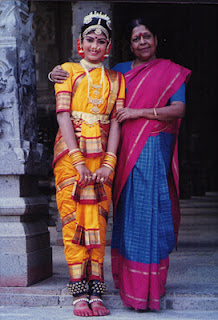 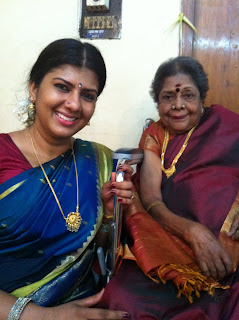 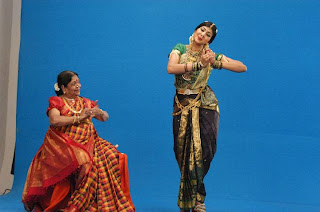 I vividly remember the day a rickshaw pulled in front of Raniannadurai street.

My mother and I were walking into the big house. Being a student of Kutralam Ganasan Pillai herself, my mother had very specific choices of whom I should train under and in what sampradayam. I was barely 3 years old.

Sarasa ma was warm and welcoming to my mother as they knew each other from before and was only too glad to take me in. Unlike a few other Gurus in the city who had adviced my mother to wait until I am 7 years old, sarasa ma readily agreed to take me in. She said, if a child has the potential, let us catch her young.

My house was a few streets away and I used to be dropped at class every day. All I remember of the first few years was sitting on her lap watching all the senior girls dance.

She would take classes for hours, tirelessly. She would sing so melidiously and expect the students sitting around, to sing as well.

My salangai poojai was a grand affair. She had trained a mere 8 year old for a two hour debut. Gowri akka (the singer) , Ramdas anna (the mridangist, the great Tanjavur Ramdass) would be at all rehersals from day one. I remember even having regular classes to their music. Such was the musical atmosphere that I got training in.

There was never a timing or a strict fee structure. Sarasalaya was a home. I would reach there after school and spend all evening learning, teaching, singing and dancing. No one would be asked to leave after their class. Knowledge was free flowing. It was upto the dancer to grab as much as she wanted or could.

My arangetram was a huge story. Sarasa ma told me she reposited great dreams and faith in me and hence was inviting the who’s who of the dance world for my arangetram. I was so nervous and didn’t want to disappoint her. She specially composed the Bharathiyar song “ninaye rathi endru ninaikuren adi” along with the Basant Bahar tillana for me. I was thrilled and even today at sarasalaya, basant bahar tillana is known as the piece done for me, by teacher!

Every program was a learning curve with her. She never taught us abhinaya by giving us specific hands or gestures. In her teaching, there was so much freedom that even in class we were encouraged to improvise, interpret. If ten girls are dancing at the same time, teacher expected ten different versions of the same piece. On stage if we improvise, she would admire the effort and move along with us.

As a dance guru and researcher, today when I look back I am amazed at how she effortlessly she blended the gurukula system of imparting knowledge with modernity.

She never sat us down to teach the values and ethics behind sampradaya. Infact, sarasa ma in many ways stands as the melting pot of Old world gurus blending into the cosmopolitan, english-speaking dance teachers of madras. However, the learning atmosphere she provided instilled a great sense of understanding in me for music, dance and their rich traditions.

Over the years she has always been proud of the fact that I sing too. She would always make me sing for others in class as they reherse. I have spent several days over the many years I have learnt with her in class, not only dancing and singing, but also eating, picking out her silk saree for the evening’s concert, ironing them, helping her pick her jewellery for her evening’s concert etc. All through such times she would talk nine to nineteen. From Ramayya vadyar’s classes, music of Bala ma, music nuances in tanjore quartette, to madras dance politics and madhuri dixit’s dance. She had a gift of the gab. Her humor was subtle and very well known.

Being a non-performing Guru, I have never seen Sarasa ma dance much. Even in class she would rarely get up to demonstrate. But the few occasions she has, those are etched in my memory.

On an april afternoon several years ago, she, suddenly, very instinctively got up to demostrate a line from a padam. As the afternoon sun streamed into the hall, her diamond nose-stud (the only ornament she wore on her person that day) shining away, she sang and did abhinaya for the lines “Rama rama prana sakhi…” I think that day changed my life. As a young teenager I had decided that day, that I wanted to become a dancer just like her. And I wanted to wear a nose-ring, just like her too !

Over the many years, she has inspired me to become what I have. All my research and dancing and teaching I owe to her. In 2005, when I did a production based on Silappadikaram, I requested her to do a guest appreance as Madhavi’s dance Guru for me. She was so thrilled. She decked herself up. Puff-sleeved blouse and saree, maatal, odiyaanam, vanki, bullakku et all; and came to the studios. When I played the music she asked me to teach her what I needed her to do. I was stocked and stunned. But she insisted that I direct her and pushed me to do so. That to me is the greatest of day’s of my life.

Vijayadasami at sarasalaya is like new year for me. I begin my dancing year on that day by seeking her blessings and dancing to her music and singing, sitting at her feet. It recharges my artistic batteries to run for the whole year, with her blessings and guidance. This year too was very memorable. Unlike other years when we wouldn’t have much time to perform several pieces, she asked to dance a alarippu, jatiswaram, vrttam and a pada varnam. It was as if she she knew that this was going to be the last Dasami she is going to take class for me.

All my students have the greatest fortune of taking her blessings too. I took them all one day to her. We danced at sarasalaya koodam. She individually blessed all of them. Ranga mandira, both natya and sangeeta shala students respect and look up to sarasa ma and we lovingly follow the sampradaya she has imparted to me.

She is a very strong woman. Being the head of a large matrilineal family. Determined and strong willed. I have never seen her break-down. At the same time, she is also child-like. Loves food, loves to try out new kinds of food. She loves cinema and Madhuri Dixit’s dance. She also used to do great impressions of others and would make us all laugh in class. She is kind hearted and a lover of great music. I know sarasa ma loves sankarabharanam. I made it a point to sing atleast one sankarabharana kriti, padam, pada varnam or atleast a vrttam to her everytime I meet over the last year.

Needless to say I have so much more but cant put down over 2 decades of very eventful years here at once. I feel it is a divine ordain that I had the opportunity to learn from such a great Guru.

She is a pioneer and a leader, not only to women nattuvanar lineage but to the gender at large. I would like to believe that I have imbibed in me not only dance, music and teaching from her but also her strong personality and ability to face challenges and emerge a winner.

On January 2nd 2012, my Guru, my guiding light, my mentor, Sarasa ma attained the lotus feet of the Lord. I was there all day with her, hoping she may wake up and call me “Swarna…inga vaa paa”. She didn’t. It seems she has fulfilled all that she was born to do. She has been a good daughter, a great sister who took take of the entire family. She was a student par excellence, a shadow like follower of Vazuvoor Ramiah Pillai, a very devoted mother to her sister’s daughters. But above all, she was the greatest teacher. She imparted dance, music and values to her disciples as if it were the very air we breathe.

I will always miss you my dear sarasa ma, sarasa teacher. I also know that you will always look down upon me with affection and the protective motherly care and bless me, like you always have.

As I bid her good bye yesterday at 5pm I came back home and I danced for her, while her soul was leaving her mortal coil. For a Guru who had lived all her life for music and dance what else can I do? At that time, as I was overwhelmed, words just poured in my mind and I composed a song on her and sang it.

My tribute to her: describing her dark-hued (syamale) but very charming loving eyes (sarasija lochani), the one who always has a smile (hasite) and who resides in my heart (hrdaya nivasini)

You are a giver of happiness to all, all the time (sadaananda kaarini), you are the embodiment of sangeeta, music and dance (sangeeta kalaa samkshobini), you adopted all your disciples as your own child (sakala siksaa sveeharini) you have the untraceable divine lineage (niradhaara vamsini), you are pure and righteous (nirmala satya hamsini)

You are the consort of Sri Paramesvara (Parameswara nari) you are the torch bearer of the divine art of dance (pavitra nartaka kalaa vihari) you are a divine in mortal form who resides in the lotus of my heart (paramapurusha padmasri) you are hailed by the whole world, my mother ! (dharani prasidha maa janani)

Incidentally, Sarasa amma was very desirously of getting a Padmasri award. She aspired for it for years. Ofcourse she deserved much more. But this was the least and she aspired no more. But this country missed the opportunity to bestow upon her that honour till the very end. Her students are her wealth, her awards. I, hereby through this kriti bestow upon the greatest GURU in the world of arts, my mother, my mentor the Padmasri. She is a padmasri, for she resides in the inner most lotus of my heart, forever.

Having lost the first light that led me to the attic!

P.S: Click anywhere on the red writing to listen to the kriti that I have composed on my Guru.